Allsorts Challenge and another teal card

The Challenge this week at The Allsorts Challenge Blog is to create something inspired by the park or garden. I chose to use the Big Guy digital stamp from Mo Manning who could be barbequing in either the park or the garden. This is the second time I have used this image and although it is great for men's cards it is very time consuming to colour as it is quite fiddly and I think that I could colour 2 or 3 Gorjuss Girls in the same amount of time!!! 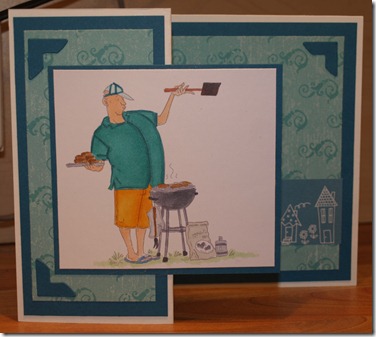 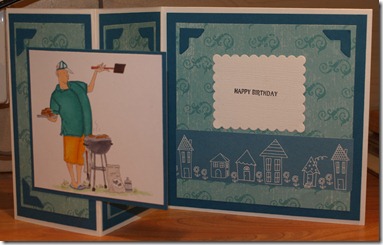 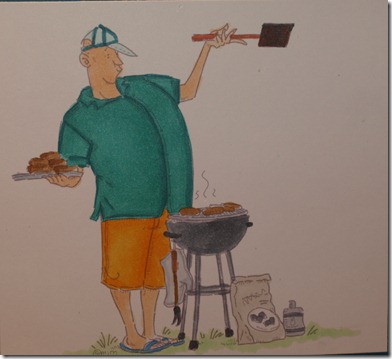 Everything else apart from the image is from Scrapbook Sisters although the patterned papers came from my scrap box so are now longer in stock.

Again this will be going to Sue (see her blog) to sell in aid of Ovarian Cancer, a very good cause. Check out Sue’s blog and if you can make some cards for her there is some pretty good blog candy on offer!

Here is a card for The Sugar Bowl Challenge – it’s the first card challenge that I have participated in for a while. It was a nice easy sketch for this one which I have altered a little! 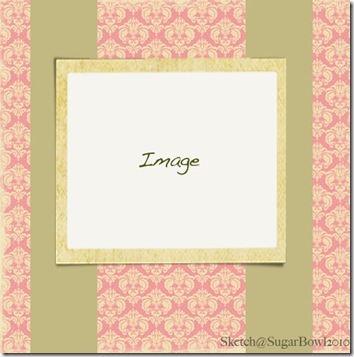 I have moved the 2 vertical stripes to the left, placed the image at an angle and added a diecut flourish at the bottom. 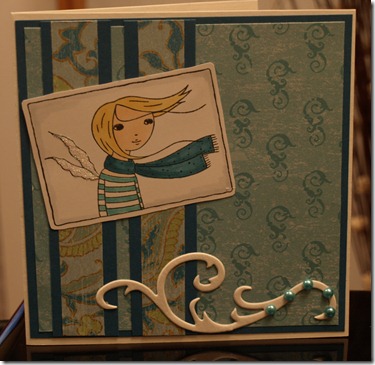 The additional requirement was pearls and I have added some teal coloured pearls to the flourish……….and speaking of teal check out the lovely Sue’s blog http://suesassortedramblings.blogspot.com/ she has lots of lovely blog candy to win if you can make some teal coloured cards for her to sell in aid of ovarian cancer.  This is the first card that I have made for her but I intent to make at least another couple more!

It’s been a while since I’ve blogged. I’ve been busy going on lots of days out – Brighton, The London Eye, Kew Gardens and more. So there was no time to craft but plenty of photos taken for future scrapping!

I have managed to finish two layouts for the Creative Scrappers challenge, again I’ve used this years holiday photos. 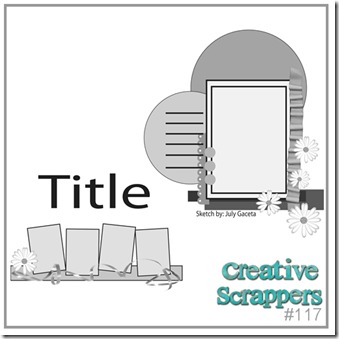 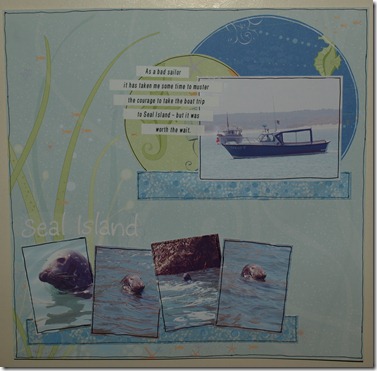 The patterned paper is Heidi Grace and the alphas are Papermania. I used my label maker for the journaling.

The last sketch for this month is; 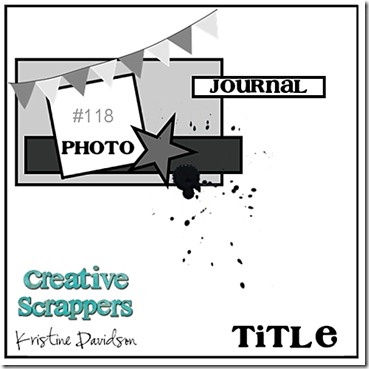 and here is my layout; 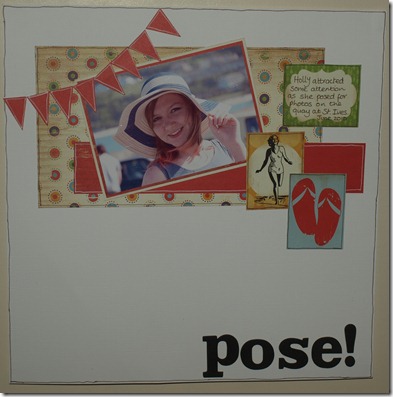 The papers are Cosmo Cricket and the alphas are American Crafts Foam Thickers. This page was so quick and easy – I really enjoyed making it!

Well, I am early for once and have already made the layout for this weeks Creative Scrappers Challenge – mostly due to a boring night on the television!

I am having a break from the holiday photos (mostly because I need to print some more out) and have used a photo of my daughter which was taken when she modelled for a photo shoot for a couple of her friends who were practicing their photography.

Here is this weeks sketch

and here is my layout; 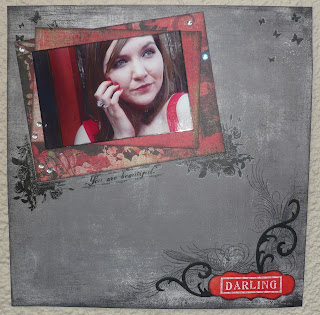 I have used some vintage Basic Grey on this one and have used some of the Scarlet’s Letter collection.I have also used my favourite Tim Holtz swirl stamp around the title along with various die cuts. I have added a few gems and some Creative Imaginations Rub-Ons. Everything, including the photo has been edged with Distress Ink Pads.

And yes I have used my beloved Basic Grey but I still have soooo much left!

Here is another layout for my holiday album. the photographs were a few of the many photos that I took at The Eden Project in June this year. This layout was quite a challenge as the sketch is not my usual sort of layout but in the end I really enjoyed it. 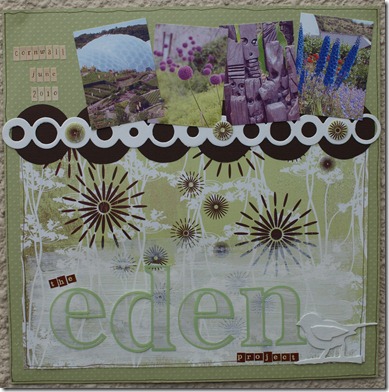 Here is the sketch 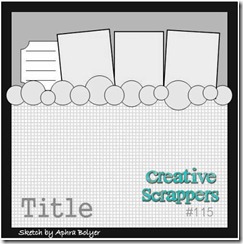 I managed to squeeze in an extra photo in my layout.

I used Bazzill dotted cardstock, Basic Grey Urban Couture, Pashmina patterned paper, L’il Davis Secret Garden Invisible Alphabet, MM and Cosmo Cricket tiny alphas, Bazzill Just The Edge strip, the bird from the Sizzix Tim Holtz birdcage die and white acrylic paint on the bird and the bottom of the page which I used to stick the acetate letters down with while the paint was still wet.

Well, the next sketch for Creative Scrappers is already out so I better get scrapping!

Peridot and a sketch

I will be entering todays card into two challenges – it was going to be three challenges but i missed the deadline on the Basic Grey challenge!……….but it still fits the bill for two. 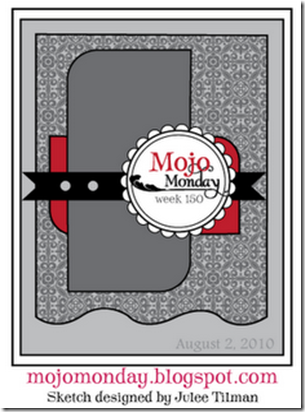 So here is my card; 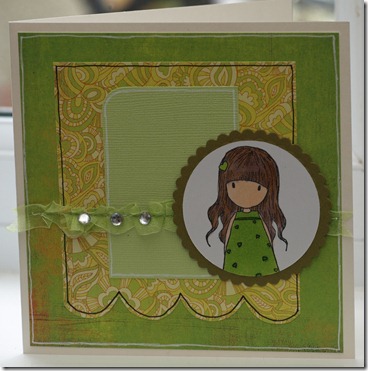 The backing papers are Basic Grey, the stamped image is a Gorjuss Girl coloured with Copics and cut and mounted in circles with Nestabilities. The ribbon is gathered and stitched across the card (that was supposed to fit the stitching criteria on the BG Challenge) and a few gems added.

I enjoyed making the card so I guess it doesn’t really matter that I missed a deadline!

Here is a birthday card that I made for my brother-in-laws birthday yesterday using a digital download from Mo Manning, my trusty Copics and backing paper which was free with The Scrapbook Magazine. 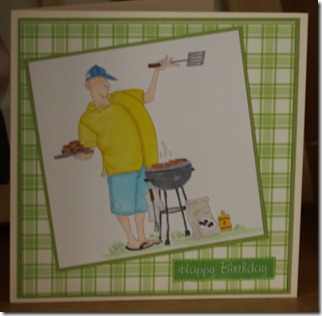 I have also been doing some sewing this week using some fabric that I bought last year. First I made a skirt, here is a bad photo of  it  on the washing line and yes it does need ironing; 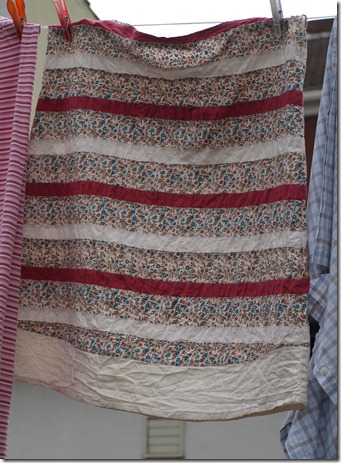 I also made a bag with the leftovers; 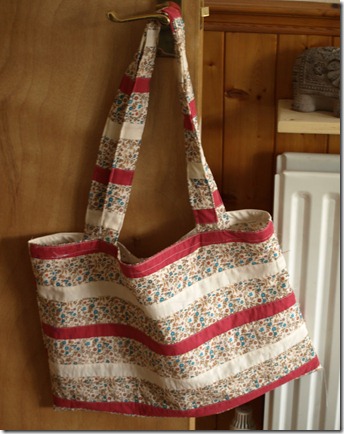 I made the bag using instructions that I adapted from www.morsbags.com. My friend Chris introduced me to Morsbags and the idea is to make cloth bags and reduce and eliminate plastic carrier bags not by buying fabric but by using off cuts, old curtains, old duvet covers etc. Making these bags has become quite an addiction in our group but it’s a good addiction! 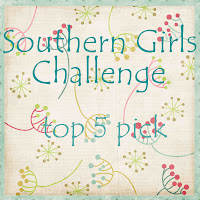